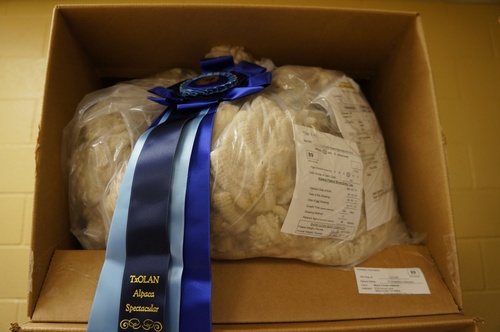 It’s Show Time, so It’s On The Road Again!
When I was a kid growing up in Corpus, everything was far away. It was a big deal to drive to Houston. El Paso might as well have been on the moon. Little did I know that my perception was reversed . . . the world is not a long way from Corpus as much as Corpus is a long way from the world! Now, Corpus fans, don’t get upset about that . . . I love CC and part of me will always think of it as home . . . but we didn’t get out much.
Since we started raising alpacas, the USA has shrunk. It is not a requirement to travel if one owns alpacas, but it is if you want to show them in national contests. Most of our alpacas stay home, but the chosen few alpacas have to endure the show season. That means being led into an arena where the judge feel around all over your body, which must be embarrassing. Then, they look at your teeth, pull out a few hairs for comparison, and you have to stand there and behave. The good part, for the alpacas, are the other alpacas. Apparently all alpacas know one another because they are immediately glad to see all the others.
We already have completed the “local” shows (Fort Worth, Houston) and, by June, we will have been to Grand Island NE, Denver, and Louisville KY dragging a trailer full of alpacas both ways. With apologies to long-haul truckers who have to do this all the time, there is a certain romance in being “on the road” pulling a trailer. In gas stations from coast to coast (also in the MGM Grand parking lot), people wander over to the trailer and ask “what are THOSE?”. The road can be a fun place. Besides, Arkansas has great road signs like “Used Cows for Sale”, “Tattoos While You Wait”, and “Road May Be Wet When Raining”. Not kidding.
We feel shows are important. First, there is networking with people from all over the USA who love alpacas. Second, the shows are THE place to verify your breeding program with wins, or to find out you have work to do with losses. Shows are truly a benchmark. We have waited breathlessly as the judge, at last, announces our alpaca as the champion. We have also kicked the dirt in frustration when we got the “walk of shame” and had our alpaca “excused” from the show ring. Money hangs in the balance . . . having a champion male at a national show will make the phone ring.
Featured Items 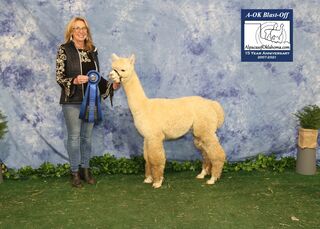 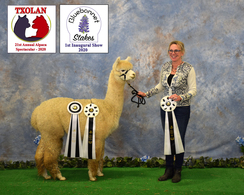